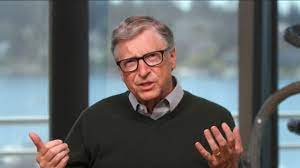 ARE YOU prepared for artificial intelligence.

Artificial intelligence have for years been replacing humans. It is about machines, computers and now robots taking over and doing what humans did. Through the years simple machines have become more complex ones, as they are improved to replace humankind. Suddenly the ‘in’ talk by a selected few is how irrelevant the rest of humans are.

It is still debatable whether Bill Gates actually said 3 million persons needed to die, or even that ‘Black people are useless doing nothing more than eat, sleep and take up space” Whether or not he said it, one is led to consider how many persons actually think it and then again those who have the power to do something and even more – What is actually being done.

One perspective on artificial intelligence is that it is here to replace mankind, and it is happening over time in a subtle way. As subtle as the takeover of Cuba by Fidel Castro who till then had the nation believing in the ‘good’ he was ‘doing’. Interesting that artificial intelligence which began with mankind will now replace its Creator.

‘Robots’ and ‘Passengers’ are two movies about robots taking over. The rest are listed here.

Already according to the Forbes magazine thousands of holders of high end jobs such as managers have lost their jobs.

As creative as we endeavour to become even doctors, lawyers and skilled persons such as draftsmen and artists, architects are being replaced.

How fast is the end of life as you know it beyond the Covid pandemic effect.

Is it a case where humans are their own enemies when they have become too smart for their own good, too hungry to even care about food?
Then again when ultimately humans are almost totally replaced, its anyone’s guess what the world will be like. Maybe a real smart person will take a hint and fight against pending nightmares.

HINT:-
Lawyers are at risk too.. no one is safe!
Read more here:

Widespread job loss – cause of AI

What makes the top of top richest persons worldwide