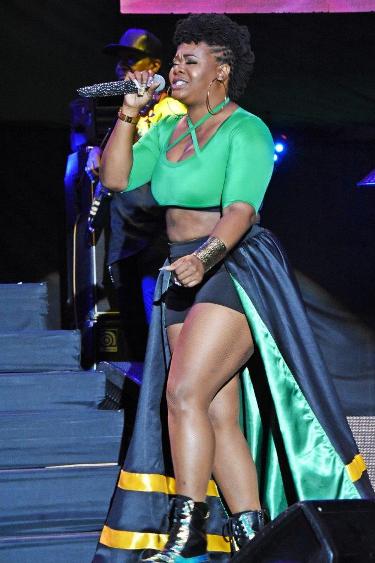 Dancehall and Reggae artiste Stacious is the 2021 Jamaica Festival Song winner. The Singjay won the title along with a trophy and $3 million dollars cash at the Festival Song Grand Final at the National Indoor Sports Centre in Kingston on Thursday. Entry songs from the competition’s top 12 finalists covered a range of Jamaican music genres, including Mento, Ska, and Reggae/Culture.

Stacious whose real name is Stacey Scarlett Bryan, out shone the other 11 vibrant and patriotic Festival Songs with her winning song, the upbeat Reggae/Dancehall-based Jamaican Spirit.

The other finalists who caught the voting public’s eyes were second and third place winners DB and Tamo J respectively. DB whose given name is Kevaughn Scott took home the second place trophy and an accompanying cash prize of $500 000 for his Ska-based Love Jamaica My Land, as well as the special award for Best Performer complete with its own $500 000 cash prize; therefore totalling his prize money to one million dollars ($1,000,000). Meanwhile Tamo J, given name Dwight Allen, received the third place trophy and accompanying $300 000 cash prize for his smooth-Reggae song Real Talk (Jamrock).

“The Festival Song competition is charged with finding a unifying and patriotic song that encapsulates the Independence spirit, and will drive Jamaicans across the world to celebrate the black, green and gold with pride; and there is no doubt that this year’s Festival Song ‘Jamaican Spirit’ does just that. Stacious should be proud that she has presented the nation with a song that is uplifting, unifying and catchy, and we expect that it will be remembered for festivals to come!” said Minister of Culture, Gender, Entertainment and Sport, Olivia Grange.

Minister Grange also congratulated the other winners and participants, and highlighted the importance of the song-writers, and music producers who have helped to raise the standard of the long-standing competition back to that of a professional song competition.

“It brings me great pride and joy to see our dream for this competition being realised, as it continues to draw more and more diverse entries from both upcoming and established artistes across all genres of Jamaican music and throughout all age groups. It was warming to see so many young persons in the finals, each adding their own unique flavour to this melting pot of indigenous Jamaican music that celebrates our one-ness, our Jamaican-ness each Independence season,” Minister Grange added.

Meanwhile, Stacious who says she felt like she was a winner before she stepped on the Grand Final stage, said that she was elated for the win and knew she earned it through her steady campaigning.

“I am still coming to terms with the win! I set out to create a song that celebrated our Jamaican-ness without using the regular festival song lyrics that surround our delicious and diverse food,” Stacious laughed.

“I wanted to uplift and inspire us through a more modern Reggae/Dancehall song that celebrated our resilience and our ability to keep our heads up when things get tough, especially during this COVID-19 pandemic; and based on the public votes, the people felt my vision,” she concluded.

Stacious is the fourth female winner in the 55 year history of the competition. The three previous female winners are Heather Grant in 1992 with Mek We Put Things Right, Cheryl ‘Shetenge’ Clarke in 1999 with Born Inna JA and Abby Gaye Dallas in 2012 with Real Born Jamaican.

The 2021 Festival Songs will continue to be available to the public through the international music platforms: Apple Music, Amazon Music, Tidal, Deezer, Youtube Music and Spotify, while snippets of the songs may also be found on the JCDC’s website. This competition was sponsored by the CHASE Fund, Digicel, Shirley, Radio Jamaica/ TVJ, IRIE FM, Suncity 104 FM, CPTC and the Jamaica Observer.

Jun 3, 2022 Administrator
Jamaica over 50 One culture from many