Skip to content
Raw and Direct Religion and Spirituality 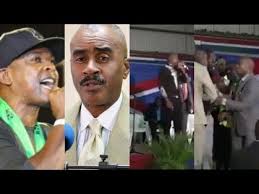 So now there is a new saga sweeping the waves across the globe.
Both participants are they themselves the creators of sequels.
Pastor Gino Jennings hosts debates and invites several members of the public to attend.
Mr Vegas goes with his ego.
Real issues play out and the world especially Christians should take note. All over the world there is a pick of sides, but hardly anyone doing so for the right reason and dare I say accurate, profound motivation.

Firstly lets ask some questions:
Why would anyone, most of all Mr Vegas accept any debate where the MAIN participant is the organiser, the host, the MAIN sponsor, the producer, the moderator and in venues 90 per cent filled by persons in support of this very same person.
BUT Mr Vegas was among the ones who did. Perhaps to appear on TV.

Why then upon accepting did Mr Vegas not prepare himself – at least read the scriptures before attending. Maybe a sequal on this site about entering debates is necessary. However, this was war, whether you see it holy or otherwise – it was war. Two opposing sides fighting, wrestling over THE TRUTH – hmmmm

Clearly Mr Vegas did not even research, not even to borrow scriptures from his colleagues and there are a profound few – Lady Saw, Carlene Davis, Tommy Cowan, Stitchie and of course Papa San.

Could his ego be bigger than the reality of the moment. In fact both parties seem to have operated out of ego over spirit.

Both sides operated as though unaware of their role as leaders.
Pastor Gino Jennings is shielded to an extent, by the popular practise of the bible that ministers of God should not be criticised. However being both servants, who have offended persons, perhaps unaware of the real offences there is need for open comments.

So millions of tongues wag, and both parties benefit from the popularity.

The real issue however will remain how relevant this debate is to Christendom, what are the advantages.

Mr Gino Jennings speaks on humility, and started this spiral of attacks with his name calling. There are in fact three two many tapes with him definitely calling females who don jewellery and make up hoes, prostitutes. He addresses the men who are with the hoes as well.

During most of the debates, he becomes evasive when cornered. Overall he is subtle in passing off several idiosyncrasies, and therefore shielding his opinion with the truth can basically manipulate many. Persons in search of hope, entertainment, or a feel good and clean will therefore be hooked easily.

Pastor Gino Jennings is a zealous man, but must be mindful that his being overly spiritually renders him of no earthy good. On one hand he seems very unconscious of his own utterances. On the other hand, he seems overly confident based on the overpacked congregations.
Is there scripture to dictate now that men should now dress in pants,and women in broad and broader hats
Jesus himself never wore pants, and yet he was truley girded.
The Bible however is clear on how reprimand should be meted out – in love, regardless of any context of culture, or crime.

Crowds and flocks does not translate into real support if one should take a closer look.
The bigger issue is how this debate reflects the persona of Christendom.